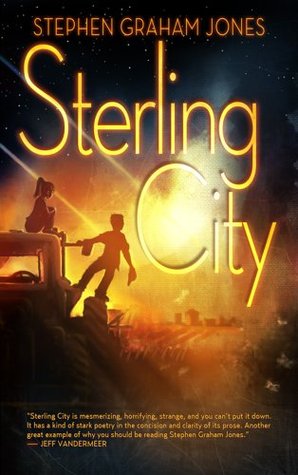 In my own definition of the 'Weird Western' I extend the sub-genre's purview to include fiction set not only in the western United States of the 'cowboys and indians' era, but also that set in the 20th and 21st century western U.S. - as long as said fiction also includes elements of the uncanny or macabre or otherwise outré.  So in addition to books by, say, Arianne 'Tex' Thompson and Guy Adams it would also include books by, say, Joe R. Lansdale and, our man of the hour, Stephen Graham Jones.  (To take an example from a single author's oeuvre, the Weird Western encompasses both the 1850s Texas-Mexico setting of Cormac McCarthy's scalp-hunting odyssey Blood Meridian and the 1980s Texas-Mexico setting of his brutal crime thriller No Country For Old Men.)

This is my third review of a Jones book (the first two are here and here) and I think I can say that his is always a western sort of vantage, albeit a contemporary Blackfeet Native American one.  (That said, explicitly American Indian characters are by no means a guarantee in his fiction.)  His works also always seem to contain some element of the bizarre or gruesome, from out and out genre material, such as zombies and werewolves, to surreal and 'meta' narration of dark and mysterious events and relationships.  And Jones's brand of weird can imbue a range of modes from crime thriller to family drama to horror story, all with loose and blurry borders, often hybridised, and yet always 'literary'.  I've rarely seen someone so joyously and offhandedly mix the 'highbrow' and the 'lowbrow'. (All the 'high' stuff is in the prose style and themes by the way.  It's the content that seems pretty consistently working class, with occasional white collar stuff in the margins.)  There's often a lot of poignancy, and ever an undercurrent of very, very wry (and occasionally bonkers) humour.  (I get these impressions from having dipped into his first few novels as well, an experience I'll return to below.)

So, to a degree, I think all of Jone's work can be said to be of the Weird Western mode, though that by no means captures the entirety of what he's doing.  In fact, his kind of western writing is really just showing us how weird the western USA (and at a larger scale, existence itself) simply is, a fact we are prone to ignore.  Thus our need for prophets like Jones.  And thus advancing my own theory that all good literature is weird literature, all good philosophy is weird philosophy, all good theology is weird theology, etc.   And by the 'weird' I don't mean just the 'messed up' or the morally twisted. Jones's is not a freakshow literature for the titillation of easterners' prejudices.  It's a regionalised mirror that can be held up to anyone from anywhere to show that the comically grotesque carnival shapes are not in the glass but in life.  For all of us.

Sterling City is a lovely little meditation on just that.  Coming in at a mere 81 pages, it's a one-sitter for you fast readers out there and a two or three sitter for slowpokes like me.  I don't want to give too much away, but on page one you know there's a cosmic element and by page six you see a big reveal of the creepily weird, which the rest of the novella circles round as a major plot factor.  In tandem with this knowingly pulp element is the story of the breakdown of one man's marriage.  Or rather, the very moment his wife leaves him and his attempt at playing that event cool, and failing to.  Both of these - a grotesquery's arrival and a spouse's departure - would be highly dramatic events in real life, and yet Jones's relentlessly elliptical and indirect style makes them seem almost like things that happen in the corner of your eye.  I mean, he confronts both directly.  You get a juicy view and the weird element in particular is initially surrounded by strong emotion from one of the characters.  But it feels like the view is for mere seconds at a time.  The history of the marriage's troubles and the present bizarre cosmic influences come only in half-understood glimpses for the reader.  Both of these happenings consume the consciousness of the protagonist, yet both seem oddly just off stage for most of the novella.

Similarly, the larger West Texas landscape is fully backgrounded in favour of the farm on which the story unfolds (with one episode in town).  This makes for a tight focus.  It achieves some atmosphere in its concision, mostly focused on farming equipment and farm buildings and farm work.  This is good, and I enjoyed being there in that kind of small psychogeography.  Yet I can't help but feel that the story's possibly a little too long to sustain its own smallness.  After forty pages or so I felt it needed to somehow open out to the greater environs more, and possibly the point of view of more characters.  I enjoyed being in Lee Graves's head, and recognised a little of myself in him, but a story this length needed a little more scope I felt.  It's a fairly minor complaint and by no means ruined the read.  There were, it must be said, about ten pages toward the end that didn't work at all for me.  It was supposed to be a tense scene of the central piece of large equipment almost malfunctioning, but I have no knowledge of this whole area (farming and its equipment and procedures) and the description did not enlighten me, so I was just plain bored.  But again, it was a minor misstep and the story finished well. The denouement of the weird element was especially satisfying to me, gorgeous with alien wonder.

Indeed, this is kind of a story about the Beauty of Monsters, which I can always get behind.  It's also very intentional and explicit about hope in the end, about New Beginnings after the Apocalypses that punctuate our lives. It reminded me of R. A Lafferty in that respect.  This actually makes it incredibly radical among its Horror and Weird Fiction cohorts, which tend, especially among the avant-garde, towards powerful pessimism and bleakness (the avant-garde of the Lit Fic crew can be this way too, and Double-Fish Jones swims in both worlds).  The story doesn't promote hope without any ambiguity mind you.  And from what I've read from Jones so far, he has a number of pieces both for and against hope and lots of places in between.  His despairing pieces, however, are always poignant and humane and even kind of sweet.  He seems to want to hope, even in despair.  That might make him kind of 'out' with some of the Cool Kids of Nihilism, I don't know.  I hugely respect it.

I'd probably give this particular book something like a 3/5, but right now I'm more into Jones for the total package than merely for particular works.  He's a presence, a force.  Following his elusive, yet somehow generous, remarks on Twitter and Facebook round out both his style and substance, just like his 'Acknowledgements' at the end of Sterling City.  (Always be sure to read any dedications or story notes or other authorial 'paratexts' by Jones - he's always telling you a little bit more of what he means and who he is and what he cares about in those things, even whilst deepening the mystery). Any time you see an article written by him, it'll be worth checking out as well.  I'll note here that I'm still trying to find my way into his more 'literary' works.  I read around a hundred pages each of his first two novels, The Fast Red Road: A Plainsong and All The Beautiful Sinners, and while both blew my mind on some level, both also kind of lost me with the almost painfully indirect style in which he wrote them.  Mind you, I wasn't really committed to reading them at the time.  I was only dipping and dabbling and when they proved difficult, I shelved them for a future go.  Which I look forward to, along with a ton of his other prolific output, both on the more literary end and on the more genre end. His is an exciting career to follow.